Plants are self-nourishing organisms known as autotrophs, which often synthesize their own food by using energy from the sun. Accompanied by sunlight, plants also intake carbon dioxide and water to form a sugar called glucose (C₆H₁₂O₆). Plants use the glucose they make for energy and to build other material such as cellulose and starch. This process is called photosynthesis.

In addition to glucose, water and oxygen are also byproducts of photosynthesis. Photosynthesis is conducted by specialized organelles, found within a plant’s cell, called chloroplasts. Chloroplast have a double membrane and an intermediate space. They consist of thylakoids and a stroma. These thylakoid membranes contain special pigments that absorb sunlight in the form of photons, a tiny particle of light with unique properties. Pigments absorb specific colors and reflect others.

In terms of visible light, each color has a different wavelength. In plants, chlorophyll a and chlorophyll b are the principal photosynthetic pigment. They are also referred to as the primary pigments used in photosynthesis. Chlorophyll pigment absorbs red and blue light and reflects green light. Due to the rest of the sunlight spectrum being reflected, plants such as geranium appear to be green. It is important to understand the concept that colors seen by the human eye are the wavelengths that are not absorbed but reflected back.

This stored starch is available for the plant to use during the night, when sunlight is limited for the plant to undergo photosynthesis. An iodine test was used to indicate the presence of starch, turning the leaf dark blue/black at locations where it is present. Placing a red, green, and blue filter paper on the geranium plant, it can be hypothesized that glucose would be most apparent at the location where the leaf is covered with the red filter paper and blue filter paper, not where the green filter is placed.

This experiment had four treatments: no filter (control group), red filter, green filter.  In the beginning, the leaf pre-treatment was drawn, with the filters, to keep track of the positions of red, blue and green filters on the geranium leaf. Once the locations were noted, the leaf was placed in an alcohol bath to remove all green chlorophyll pigment. It was transferred into a petri dish and iodine was poured over the leaf to be examined in 5 minutes for the presence of any starch (Figure 1.). 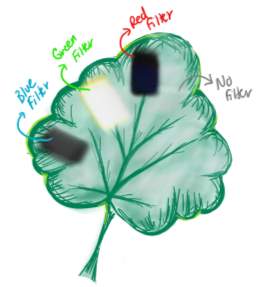 Figure 1: Sketch of the geranium leaf used to study whether comprised glucose monomers known as starch will appear on distinct colored filters during photosynthesis.

The results were recorded in a simple yes/no table to give a clear and coherent answer to whether starch was present. (Figure 2.) An iodine test was used to indicate the presence of starch. The areas where no starch was present were white/yellow and areas with starch were dark blue/black. The blue filter (425-500nm) showed high starch content. Similarly, the red filter (620-700nm) showed high starch content. However, the green filter (500-580 nm) showed opposite results of having a low starch content. The chlorophyll pigments and wavelengths are provided in Figure 3.

Figure 2: The results seen when iodine indicator is used to examine the presence of starch. The amylose in starch is responsible for the dark color when iodine is added, due to the iodine molecules moving into the amylose coil.

Figure 3: This table summarizes chlorophyll A and chlorophyll B ability to absorb light of different wavelengths to support photosynthesis.

The data we obtained does support our hypothesis since from the four treatments the green filter was the only one that lacked starch production.  This may be due to the fact that red wavelengths are longer, allowing it to emit more energy to the plant.

It is crucial to comprehend the process that takes place once red or blue wavelength reaches the geranium plant chlorophyll pigments for a better understanding of the effects of colourd light on the light-dependent reactions of photosynthesis. Pigments are arranged alongside proteins into units called photosystems (Figure 4.).

There are two photosystems fixed in the thylakoid membranes of plants, Photosystem II and Photosystem I, which trap the photons from the sun to power the light- independent reactions. Within the reaction centre of these photosystems, a photon excites an electron from a chlorophyll A molecule which is passed on to the primary electron acceptor. Due to the passing of the electron, photosystem II compensates for this action by splitting a water molecule and releasing oxygen into the environment. Both photosystems get charged separately, deliver their electrons to different locations, and answer to different wavelengths.

In 2014, according to a lab investigation that used colored light on spinach leaves to test for the effect of light color on the rate of photosynthesis, it was stated that white light was the optimal for photosynthesis since it provided a larger spectrum of colors compared to the red and blue light bulbs which provided a small range of colors. There are many types of pigments within a plant cell, therefore a single colored light allows one type of pigment to be activated as compared to white lights which allow all pigments to be activated (Tawil 2014).

This research can be applied to analyze why within the geriuman leave experiment, the red filter noted to have a darker result from the iodine test compared to the blue filter. Red has a longer wavelength (less energy) than blue (high energy). These results raise a question about what wavelengths and energies are optimal for the distinct chlorophyll pigments within the geranium plant.

Figure 4: The process of how photons are used to make ATP and NADPH, induced by Photosystem II and Photosystem I , on the thylakoid membrane. Reaction centres (P680 & P700) where energy is transferred which leads to other reactions.

This experiment can be further investigated by adding another treatment :  black filter paper. This will explore whether the black filter will reflect or absorb the wavelengths transmitted. This will allow experimenters to explore the idea of light-dependent reactions at night and what process plants must carry out to adapt to these environments.