To what extent does the colour of light have on the rate of photosynthesis on Cabomba Aquatica plants?

Photosynthesis is a process that occurs in all plants including bacteria and algae. They utilize the energy provided by the sun to produce energy in the form of glucose and oxygen. Photosynthesis is vital for the survival of most life forms on earth. The process of photosynthesis includes light energy being absorbed by the plants and synthesised with carbon dioxide (CO2) and water (H2O) and gets converted into glucose (C6H12O6) and oxygen (O2).

Cabomba Aquatica plants are also known as fanwort plants and are native to South America. Cabomba plants survive in aquarium environments with hard water and minimal light. They are favoured by aquarists as oxygenating plants for fishtanks.

Light can also be absorbed by pigments. Different pigments absorb different wavelengths of light. The leaves of a plant are green because the chlorophyll within them absorb all other wavelengths of light and reflects green light. In the absorption spectrum it can be shown that red light and violet light are the most absorbed whereas green light is most commonly reflected.

During my preliminary I attempted to measure different colours in order to gain an understanding on how the colour of light affects the rate of photosynthesis. I kept the light bulb at 5cm away from the test tube and placed a coloured filter in front of the light so that the colour of the filter shone on the plant.

I realised that the way in which I filtered the light wasn’t the best way at all and in order to get the best results I thought it best to wrap the filter around the test tub and allow the light to shine upon it ensuring most of the coloured light reaches the Cambodia leaf. 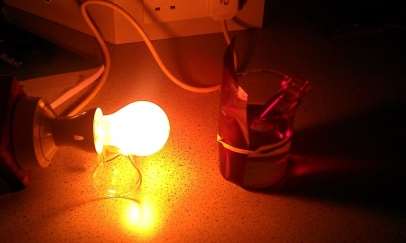 Standard deviation from the mean: 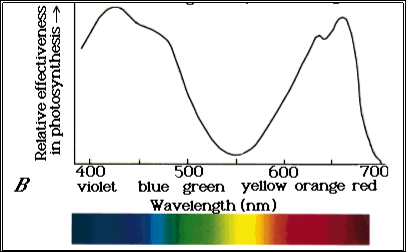 The data table supports my hypothesis partially. The green light photosynthesised the least whilst yellow light photosynthesised and then red light. I hypothesised that red light would photosynthesis the most and would be the most efficient whilst green light would be the most insufficient and synthesise the least, the only anomaly was the effect of yellow light which indicates an inaccuracy and unreliability of the apparatus used. Violet light was also unusually low suggesting inaccuracy and error. Perhaps the yellow filter was in fact a mix of multiple wavelengths causing the strange results I gathered whilst white light was a mix of all wavelengths.

Mean results would be plotted on a graph and a smooth curve of best fit would be drawn through the points with error bars are each point. Each bar represents the standard deviation from the mean for each wavelength of light. The presence of anomalies and outliers creates inaccuracy and unreliability within my results. The error bars where slightly large for some of the wavelengths of light indicating inaccuracy of results.

The colour of the leaf played a part in the rate of photosynthesis. Leaves may come in different colours, because the leaves used in this experiment were green, green light is more likely to be reflected. A different coloured leaf may produce different results and thus further investigation would be required. Looking at the image above which shows the literary value of wavelength and rate of photosynthesis it became evident to me that repeated investigations are important. While I was correct that green light would have as low photosynthetic rate, my data did not follow the trend that it should. Yellow light should have also been one of the lowest rates however in my experiment I found it to be one of the highest and blue light showed to have one of the lowest rates. This led me to conclude that my experiment was inaccurate.

There were numerous weaknesses within my experiment that caused unreliability and inaccuracy.

Firstly I performed my experiment at the same time as the rest of the students within the class meaning that the light intensity was mixed with those near to mine thus increasing the light intensity and affecting my results. This issue is a minor one yet it still adds to the unreliability and inaccuracy of my results.