The purpose of this lab experiment is to provide the opportunity to view how an ecosystem functions, and how it changes over time. It allows one to observe and assess the properties and various components within the eco-column. The eco-column is set up with an aquatic habitat, decomposition habitat, and a terrestrial habitat. The diverse compartments enable the eco-column to be complete with the necessities of a true ecosystem. As the eco-column transforms over time, it permits a person to analyze a condensed simulation of the process that an actual ecosystem undergoes. The properties that were tested on a weekly basis are the following: odor, turbidity, color, nitrates, dissolved oxygen, alkalinity, pH, temperature, and soil. As the tests are completed and changes are observed from week to week, this allows one to formulate hypotheses and statements. An eco-column is beneficial to students because it is a hands-on and visual construction of an ecosystem. This lab not only provides students with numbers and data, it gives them the opportunity to obtain the data on their own and view firsthand the changes that occur.

1. Identify two Food Chains or Food Webs in each of your habitats (chambers). Use arrows to illustrate these food chains and food webs; complete sentences are not required. Use extra paper if needed.

The producer, which is the grass, gets its energy from the sun through photosynthesis. That energy is then transferred to the crickets, which are herbivores. The spiders consume the crickets to gain energy. Finally, the worms break down the spider and renew the nutrients.

The producer, which is the algae, gets its energy from the sun through photosynthesis. That energy is then transferred to the ants, which are herbivores. The praying mantises consume the ants to gain energy. Finally, the worms break down the praying mantis and renew the nutrients and energy back into the soil.

2. Identify and briefly discuss the biogeochemical cycles which are taking place/which are present in your EcoColumns. Do not merely state that “they are all present”; instead, provide more specific information.

Nitrogen Cycle – Nitrogen goes from the decomposition habitat to the terrestrial habitat. The nitrogen is soaked up by the soil. The nitrogen is then transferred to the insects in the habitat.

It is an open and closed system. For the majority of the time, it is a closed system because everything is occurring inside the close bottle. But when it is time to take the tests, the hole in the bottle is opened, which allows outside air and nutrients to enter the eco-column. Since it is mostly a closed system, the environment within the eco-column is required to function and stay alive with the cycles and processes it must undergo. With only slight exposure to an open system, it does not have a large impact on the eco-column.

4. What kind of niches are available/present for the various organisms in the column? Be specific, descriptive, and use terminology that is pertinent to the topic.

In the decomposition, the worms and other organisms in there decompose the dead organic matter within the eco-column. They keep the cycle going, and keep nutrients flowing in the eco-column. The algae in the aquatic habitat are responsible for undergoing photosynthesis, which begins the food chain and is necessary for the eco-column to survive. The organisms in the terrestrial habitat are responsible for consuming the leaves and grass, which transfers the energy to the next level.

The water changes color and its qualities change over time. The organisms consume the leaves and grass, which causes there to be more decomposition. There are high amounts of dead matter within the eco-column because everything gets decomposed.

6. Discuss the stability and sustainability of the ecosystem columns in the lab, including your own.

The water temperature stays relatively the same throughout the duration of the lab. Also, the pH does not vary much over time. The potassium and the pH in the soil do not show much change either. The eco-column sustains biodiversity. In our eco-column, the environment was not suitable enough for much biodiversity to be able to survive and grow in the eco-column.

The dissolved oxygen increases overall throughout the duration of the experiment. The water receives more oxygen as time progresses.

The pH only slightly increases throughout the 77-day period. It hovers around the 7-mark, which is neutral.

The turbidity is the quality that undergoes the most drastic changes. It goes from one extreme to the other within just a week.

8. Explain what eutrophication refers to and how this occurs. Apply this explanation to your ecosystem column. How might eutrophication take place in your column? Explain fully.

9. Pick another group in your class. How do your data compare to theirs? Brainstorm some causes/reasons for any differences.

I compared the data of my group to the data of Justin Setzer’s group, and our data was relatively the same. The dissolved oxygen, pH, and temperature of our water shared the same trends and patterns. The soil test results they had were slightly different, which is most likely due to the area in which our groups extracted the soil.

10. Finally, address any sources of error in this lab. This should be narrated in a “cause and effect” manner and talk about specific problems. A good example would be “water did not drain from the terrestrial chamber so …” while a bad example would be “we messed up the measuring one day.”

The soil that we retrieved from the testing we completed on 9/24 was not suitable for testing the next week on 10/1. We did not add enough water to mix in with the soil, so it was difficult to get a good sampling with the pipette without stirring up all the soil.

This lab experiment was quite helpful in expanding my knowledge of ecosystems and what it takes for one to function. I learned that many processes and cycles have to be executed the right way, and without error, for an ecosystem to remain functioning. Determining the water and soil qualities and how they changed over time was imperative to this lab because it allowed one to see how and why they changed. It is important to know that because the qualities can be tested and observed in all bodies of water. The eco-column was very instructional, and it is a great tool for students wanting to broaden their knowledge of ecosystems. 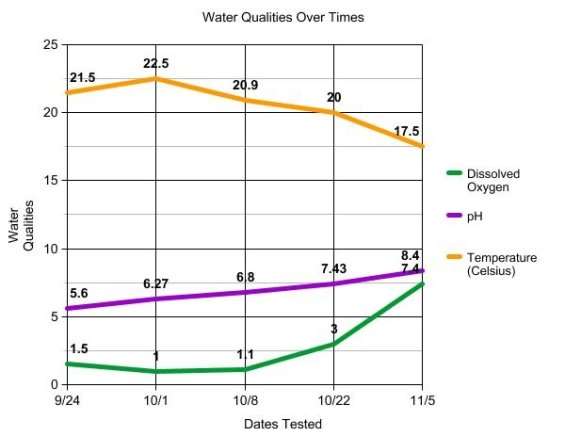