A group of organisms of a particular species (animal, plant, insect etc.) that can interbreed and are living in the same geographical area at the same time.

Population can be characterized by their:

POPULATION GROWTH WITHOUT ANY REGULATION

When there is no regulatory factor, the population grows exponentially and this type of growth pattern is called exponential growth.

The biotic potential of a population is its maximum rate of increase under ideal conditions. It can vary from species to species based on:

Thomas Robert Malthus (1766-1834) first realized that any species can potentially increase in numbers according to a geometric series. This type of growth is also called as “J-shaped growth” because, if you graph the number of organisms over a period of time, the resulting graph looks like the letter “J.” Gradual population growth continues over a relatively long period of time and suddenly increases dramatically, producing an almost vertical line on the graph and the graph is often referred to as the “J-shape” curve. 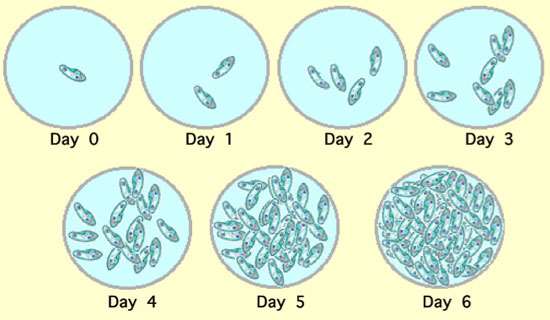 A population of Paramecium in a small laboratory depression slide is pictured. In this population the individuals divide once per day. So, starting with a single individual at day 0, we expect, in successive days, 2, 4, 8, 16, 32, and 64 individuals in the population.

Following assumptions were made by the ecologist about exponential growth:

However, exponential model is unable to achieve in practical, it gives reasonable precision even if all conditions met. Organisms may differ in their age, survival, and mortality. But the population consists of a large number of organisms, and thus their birth and death rates are averaged.

APPLICATIONS OF THE EXPONENTIAL MODEL

Exponential model is applicable in the following areas:

Limiting factors that can act from outside of the population are of two types:

These are the physical factors that can regulate the growth of a population. These factors include:

In some cases, exceptions do exist.

These are the factors that can affect the population growth from the inside. These factors include:

In some cases, exceptions do exist.

These both (extrinsic and intrinsic) factors are generally characterized into two main groups:

These are the factors whose influence on population dynamics is irrespective of population density.

This sort of regulation will generally happen in:

These are usually the abiotic factors that influence the population growth. These factors include:

Climate directly effects the growth rates and survival of a population. It also affects the availability of food and shelter and can trigger catastrophes which leads to increase in mortality.

Every living organism required shelter, refuge and nesting sites for which availability of space is very much necessary.

For some plants, specific day length is required for the germination of the seed thus it effects the population growth.

Rainfall is an important factor which regulate the availability of water which is the most important abiotic factor for the living organisms.

A disaster may results in high mortality which regulates the growth of population at a very fast rate.

Some organisms are restricted to specific breeding season and they can only breed in such seasons only hence different seasons can regulate the population growth accordingly.

Certain anthropogenic activities like damming river can significantly regulate the population growth as well as their distribution.

These types of factors are a direct result of a species’ population size. Usually these factors arise because the population of the species have to compete for the same resources in a limited geographical niche.

Density-dependent factors function most strongly when a population is

They can be of two types:

Factors affecting the population growth within a species are as follows:

Particularly important for organisms living in a small-enclosed ecosystem, a large population in a species means that the waste produced by them begins to come into play, as the waste increases the risk of disease, and reduces hygiene. This is still the case in some human societies, such as villages in Africa, which are over-populated, as sewage systems flow right through the living area, and is one of the main causes of death in these areas.

Members of a species will require a minimum amount of food in order to survive. These members may have to compete with fellow members of the same species (intraspecific competition), or may have to compete with other species (interspecific competition). As food will become limited when the population reaches a size, the death rate will increase until the food supply is sustainable for the population sizes continued survival.

A large number of males required a large number of females to reproduce but the ratio of males and females are not always same thus one may have to compete with other to get its matting partner.

A disease can spread rapidly across the densely populated area, especially across the same members of a species (Foot and Mouth for example). Disease is at its most deadly when a species population is densely dispersed, and the distance between each of the diseases host means that it is easier for the disease to spread.

Factors affecting the population growth between different a species are as follows:

An increase in population size will result in more prey for the species’ predators, therefore more chance of that species’ members of being killed. This is also the case if the predators’ species population increases, as their will be a higher occurrence of both species coming across one another.

When populations become over crowded, organisms compete for food, water space, sunlight and other essentials. Competition can be among members of the same species as well as between members of other species.

Parasites can limit the growth of a population. A parasite may live in or on another organism (the host) and consequently harms it.

Logistic growth is characterized by carrying capacity that the highest number of individuals which an environment can support. Remember resources are limited. The term “carrying capacity” describes the number of individuals that an ecosystem can support indefinitely. A population tends to grow speedily when resources are abundant but growth starts to slow and even come to a halt as resources become depleted. Resources can include food, water, light, oxygen, mates, shelter, breeding sites, nesting space etc.

As populations reach resource limitations, growth slows and populations stabilize, a growth curve form as a result is called as S-Shaped growth curve because first it increase exponentially but as the environment reaches its carrying capacity, the graph will stabilize and forming a S-shape curve. It can be expressed as:

N = increase in no. of individuals in the given time t

n = no. of reproductive individuals 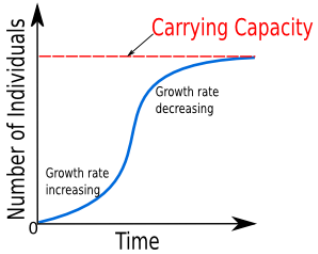 Life table show how survival and reproductive rates vary with age, size, or life cycle stage. Information about births and deaths is essential to predict trends or future population size.