Penis has three parts, roots (attached in abdominal section), shaft and the glans (cone shaped part at the end of penis). Glans is covered with loose layer of skin, commonly known as foreskin. Opening of urethra is at the tip of penis and thus discharge urine and semen through this single opening. The shaft is made up of spongy tissues and divided into three cylindrical chambers. Penis helps in penetration during sexual intercourse and transfer semen to female body.

Scrotum is situated behind and below to the penis and is a sac like structure. It consists of testicles and nerve vessels. It protects testes and lower down body temperature (Johnson, 2018).

Testes are oval organs situated inside scrotum and attached either end by spermatic cord. Testes help to produce testosterone and generate sperm. It is usually two in number and each contain seminiferous tubules that produce sperm cells.

Vas deferens is a long tubular structure that travels into epididymis into pelvic cavity. It transports the mature sperm to urethra, through which sperm and urine are coming out from the body.  Ejaculatory ducts developed by fusion of seminal vesicles and vas deferens and connect with urethra. Urethra carries semen and urine and ejaculated out of the body but separately (Johnson, 2015).

Seminal vesicles  are sac like structure that helps to attach vas deferens near the base of bladder. It produces fructose that nourishes sperm and provides energy for movement.

Prostate gland and bulbourethral glands: Prostate gland is walnut like structure, situated below to the urinary bladder. It contributes additional fluid for ejection of sperm. It also nourishes sperm. Bulbourethral glands are pea sized structures that secretes fluid and lubricate the urethra. It also neutralizes the acidity caused by drops of urine. 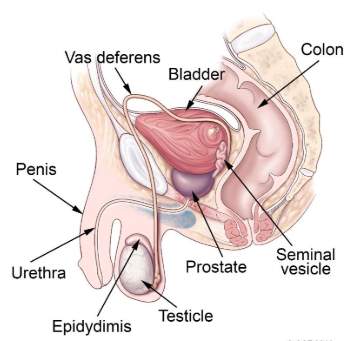 Labia majora is lip like structure and protects the other external reproductive organs. Moreover, labia minora is situated below to labia majora and surrounded openings of vagina and urethra tubes.

The two labia minora meets at clitoris and protect the internal reproductive parts.

Vagina is the canal and it joins cervix to the outside of the body. It is commonly known as birth canal.

Uterus is pear shaped and hollow structure. Fetus is mainly developed in uterus. It is divided into two parts, such as cervix and corpus. Corpus expands easily in order to hold the developing foetus (Schulster et al. 2016).

Fallopian tubes are narrow and start from each ovary. Thus it is also two in number. In fallopian tube fertilisation of egg occurs. After that the fertilised egg travels to uterus and implanted on the inner lining of the uterine wall (Lamichhaney et al. 2016). 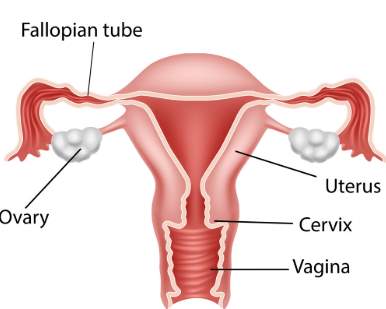 Gametogenesis is considered as a process of developing gametes by the process of meiotic division of gametocytes. Male ad females have reproduced sexually and have two different gametogenesis processes, which are commonly known as spermatogenesis and gametogenesis. It has been identified that the teleosts oocyte maturation is controlled by three major indicators that includes, maturation inducing hormone (MIH), gonadotropin hormone and maturation-promoting factor (MPF). However, recent studies evidenced that LH or, FSH is not responsible for induction of follicular maturation of teleosts. Therefore, the follicle enclosed oocyte resumes meiosis when stimulated with MIH (Chadio and Kotsampasi, 2017). In case of males, it has been evidenced that gonadotropin hormone stimulates secretion in androgen 11-Ketotestosterone (11KT) in the Leydig cells. In regards to that, 11KT has stimulated sertoli cells and produce a number of mediators, such as, Activin B and Insuline like growth factor I (IGF-I). on the other hand, it has also been evidenced that the sertoli cells and its functions are regulated by FSH hormone.

Testosterone is the male hormone, responsible for growth of male reproductive organs, production of sperm and other physical changes. It has been evidenced that during onset of puberty hypothalamus releases FSH and LH. FSH stimulates the sertoli cells after entering into testes and initiate spermatogenesis. Moreover, LH triggers up interstitial cells of leydig and stimulates release of testosterone into blood and testes. Testosterone is responsible for growth of male reproductive organ as well as production of sperms. Moreover, at adolescence stage, it also causes certain changes in male bodies that includes growth of facial hairs, axillary and pubic hair in the genital region and underarms. Voice of males have also changed and deepened. In accordance to Chadio and Kotsampasi (2017), initiation of spermatogenesis starts at puberty due to the interaction of pituitary gland, hypothalamus and leydig cells.

On the other hand, the reproductive sequence of females is more complex in nature. Pituitary gland helps to release the hormones like LH and FSH. These two hormones triggers up the production of Progesterone and oestrogen. On the other hand, progesterone mainly releases at the time of pregnancy and thus relaxes the muscles of uterus and vagina during delivery of new-born babies. FSH supports development of egg cells and develops the structure named as ova. LH also supports the growth of OVA (Carlomagno et al. 2018). According to Bleyl and Schoenwolf (2017), after menopause there are still potential eggs and follicles developed in the ovaries. However, they lose the viability as they are not stimulated by FSH and LH. This causes barrier to have children after menopause.

Sequence of events during fertilisation, implantation, foetal development and childbirth

As commented by Mitchell et al. (2015), fertilisation has followed three major events, which includes activation of sperm and ovum, penetration of sperm and amphimixis. At the activation of sperm and ovum stage, the sperm secretes hyaluronidase enzyme and have a protective layering, antifertilizin. On the other hand, ovum secretes the chemical substances, named as fertilizing, which mixed with water and attracts sperms. In the penetration stage, the membrane surrounding the acrosome dissolves and sperms have relesed lysin. On the other hand, the ovum is surrounded by three membranes that are corona radiata, zona pellucida and the vitelline membranes. With the help of hyaluronidase enzyme, sperm reaches to plasma membrane of egg. At the last stage, the male pronuclear moves inwards and changes its directions which are known as penetration path and copulation path. After breaking the nuclear envelops, the chromosomes are mixed together and this process is termed as fertilization.

After successful implantation, blastula is developed into gastrula, morula and many others, which occurs due to mitosis cell division. As suggested by Jašarević et al. (2017), during foetal development, the body parts are developed stage by stage. During 9-12 weeks of pregnancy, development of skin occurs and blood cells also develop. Liver and other organs also develop and liver started its function. Foetal heartbeat can be listened by Doppler ultrasound. Developing sex organs may also be identified with this technique. In 13-16 weeks, eyes are developed and foetus started to blink. Moreover kidney also develops its structure. Fingers and toes are clearly developed and facial features are distinct. At 17-20 weeks body is well proportioned, tooth enamel forms and eyes are open and the baby begins to move. This particular movement is termed as quickening. During 30-40 weeks skin becomes whitish pink and the developed foetus reaches at an average height of 14 inches and having weight of 7lbs (Mitchell et al. 2015). As commented by Jašarević et al. (2017), the childbirth has three distinct stages. The first stage begins from the onset of true labour and it remains until the cervix is completely dilated to 10 cm. this stage is further subdivided onto two categories, which are early labour and active labour. Early labour stage is unpredictable and the cervix begins to open. On the other hand, during active labour, the cervix will dilate from 6 cm to 10 cm. and the contraction becomes stronger and regular as well.  This has been followed by the second stage and this has begins with dilating the cervix up to 10 cm and lasts until the delivery of the new born baby. The time duration may vary from person to person and usually takes more time for the first-time mothers and women, who had epidural (Mitchell et al. 2015). In this stage, first the baby’s head comes out and then the rest of the body part slowly. The airways might have cleared if necessary and the medical experts then cut the umbilical cord. At the end, the third stage comprises of the delivery of placenta, which is considered as the shortest stage. In this stage, after delivery of the new born baby, the placenta is also delivered with proper care. After that the uterus will continue to contract and intended to return into its normal size again. Placenta is considered as an organ that develops during the pregnancy period and provides oxygen and other nutrient particles to the growing baby in the womb. In addition to this, it also helps to remove excretory products from the foetus blood. According to Desai et al. (2017), one end of placenta is attached with the wall of uterus of the mother and on the other end it is attached with baby’s umbilical cord. Therefore, it develops a connection between the mother and her baby. It has been evidenced that placenta does not have any nerve cells and thus, it is not controlled by brain of spinal cord (Jašarević et al. 2017). Furthermore, placenta also helps to produce several hormones and increases the production of placental lactose in the mother’s body.

The above discussion signifies that male and female reproductive organs are dissimilar to each other and have separate function. However, several hormones like, FSH, LH are responsible for development of female and male reproductive organs. In addition to this, progesterone, oestrogen and testosterone are responsible for development of secondary growth signs.