Any opinions, findings, conclusions or recommendations expressed in this material are those of the authors and do not necessarily reflect the views of UKEssays.com.

Everyone knows about the American Revolution, but do they know what caused it? They know that if it was not for the American Revolution then there would probably be no Constitution of Independence, and America would not be how it is today. Which brings us to what caused the revolution. There were five main causes and each cause lead to the other, falling into an order of events that brought about the most important revolution in American history. The causes go in the order of the British taxes on the colonies and the protests Boston, the Intolerable Acts, colonial unity, and the first continental congress, if it were not for these events America would not be what it is today.

It all began with the taxation on the American colonies by the British government. After the French and Indian war, the British government was drained of funds. Leaving them in need of a way to raise regain the funds they had lost. Their solution was to enforce new and different types of taxes on the colonies. The stamp act of 1766 was just the first among three taxes the British would try to impose on the colonies. The act was a taxation on all documents within the American colonies, and would strain the already found tension between the colonists and the British government even further. They believed that Parliament should have no control over their internal taxes, and that only their representatives should have control. Therefore, the stamp act was repealed in 1766, but only after riots in Boston and uprisings amongst the colonists did they do so. However, though they repealed the stamp act, it was then replaced with the declaratory act as a show of their power over the colonists. After the stamp act came the Townshend act of 1767, this act stated that any goods imported to the American colonists had to have a tax placed on them. It was for this reason that the colonists became further agitated and saw these taxes as a form of abuse of power. This act also played a role in the Boston Massacre which occurred in 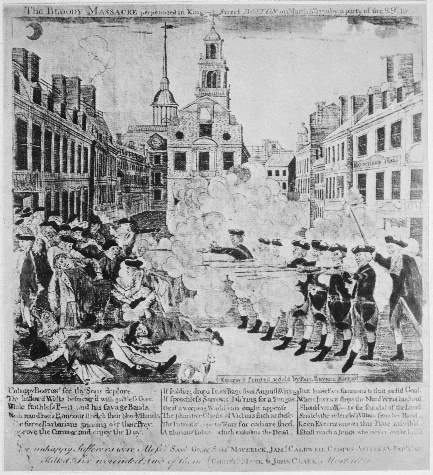 1770. It was not until Great Britains prime minister at the time, asked that parliament repeal the Townshend acts did they finally do so in 1770. In result, all of the Townshend Acts were repealed, except for the tax on tea. Leading us into the Tea act of 1773, which was to be used as a way to keep Britains East India Company funded and in business. Without the East India Company Britain would lose their main source of access to the West Indies. Although the Tea Act lowered the price of tea for the colonists, it effectively cut out the merchants within the colonies. This angered the colonists even further, and the boycott on tea was once again in affect. The colonists once again began to riot and resist the British. The one act of resistance that is well remembered in history as part of the Tea Act, is the Boston Tea Party which occurred in 1773. All of these British imposed taxes caused riots and uprisings among the colonists, but it was the famous uprisings in Boston that are the most well-known today.

There were two major uprisings in Boston, and they each played a role in the beginning of the American Revolution. The first, occurring on March 5,1770, was the Boston Massacre that was brought on by the Stamp Act. The colonists were angered by the stamp act and began a riot in Boston, which resulted in five colonists getting shot by a group of British soldiers. It was because of the Boston Massacre that the British decided to repeal the Stamp Act. The second major uprising was the Boston Tea Party, which occurred on December 16, 1773. This uprising was caused by the Tea Act, and it was because of this act that a group known as the “Sons of Liberty” decided to take action. On the night of the Boston Tea Party, the Sons of Liberty dressed themselves as Indians and began dumping the tea aboard the ships named Dartmouth, Beaver, and Eleanor. That night they threw 342 chests filled with tea into the water. The Boston Tea Party not only angered and cost the British money, but it only brought about another set of acts which the British called the Coercive acts.

Soon, after the British imposed the Coercive Acts, the colonists began to unite. After years of living under the laws of the British, the colonists had become angered and frustrated. They believed that the British never really listened or cared about their grievances and only saw them as a way to pay off their large amount of debt. Seeing as the British were never going to change, and would just keep enforcing act after act, the colonists decided that the time had come to unite. This resulted in a meeting among colonial delegates in what has come to be known as the first Continental Congress.

In Conclusion, the British taxation of the American colonists, the Boston protests, the Intolerable Acts, colonial unity, and the meeting of the first Continental Congress were the main causes of the American Revolution. When the British decided to tax the American colonists they did not foresee that the colonists would actually rise up against them. It would start with small riots at first that would eventually turn into deadly and costly riots such as the Boston Massacre, and the Boston Tea Party. So fixated were the British to demonstrate their power they had over the colonists with things such as the Intolerable acts, that they were blind to the future revolution that was forming right before their eyes. With the uniting of the colonists, their future hope of independence from Britain was looking brighter. Finally, with the meeting of the continental congress, whether the colonists knew it or not, their fate of having independence began. Because of these events the American Revolution came to be, and the Revolution made possible the world we have today.