As early as 1950s, the pituitary hormones oxytocin (OXT) and vasopressin or arginine vasopressin (AVP) have been studied across vertebrates (Choleris et al, 2013). The structure of both neuropeptides appeared to be highly homogenous, distinguishable by only two positions in their nine amino acids sequences (Cohen, J., 2005). Although they are structurally related, both nonapeptides have specific roles in distinct biological activities within the vertebrates (Choleris et al, 2013). Research by Neumann and Landgraf (2012) has shed light on the antagonistic effects of both neuropeptides, which are anxiolytic (anti-anxiety) and anti-stress effects of OXT; and also, anxiogenic (anxiety) and stress effects of AVP. The research has also provided a better understanding on the importance of OXT and AVP’s balanced activity for social and emotional development.

This essay will explore these neuropeptides in further details, mainly focusing on the association of OXT and AVP with anxiety, depression and social behaviors as well as the causing factors of variations in stress-induced patterns of OXT and AVP release.

OXT and AVP are synthesized within magnocellular neurons of the supraoptic nucleus (SON) and periventricular (PVN) of the hypothalamus (Pirnik et al, 2004). Research of agonists and antagonists of coordinated OXT release has demonstrated that OXT is released both centrally and peripherally. Studies of maternal behavior, sexual behavior and social preference are related to central OXT release whereas studies of parturition, lactation and orgasm measure peripheral OXT release (Neumann, D., 2007). Peripherally acting OXT is different from central OXT such that oxytocin neurons of the PVN send projection to the posterior pituitary before being released into the blood circulation. This contradicts central OXT, which is released within hypothalamic and limbic region (Knobloch et al, 2012).

Besides being structurally similar, their receptors also share a high homogeneity. However, this may lead to cross-interactions between them, which in turn affect the receptors’ selectivity (Griffante et al, 2005). Their receptors include OXT receptor (OXTR) and the AVP receptor (AVPR) subtypes AVPR1A and AVPR1B. In general, OXT and AVP are neuromodulators that play important roles in mediating anxiety-related behaviors, depression-like behaviors and social behaviors.

Anxiety is an emotional response caused by an anxiogenic stimulus, such as fear-related stimulus. This fear response is coordinated within the limbic regions, particularly amygdala that is vital in emotional processing (Bale et al., 2001). According to Huber et al, synaptic gating allows amygdala to regulate the emotional response, because the mechanism influences the neuronal output (Huber et al, 2005). The anxiety-induced stimulus activates OXT neurons and stimulates central OXT release from the posterior pituitary, which is then transmitted to amygdala and elevates the availability of OXT within the region (Zhu et al, 2002). Acting as anxiety reducer in social settings, OXT is controlled by positive-feedback mechanism in response to stress and thus, install the OXT-AVP balance. Consequently, the intensity of anxiety is reduced (Neumann et al., 2012). Sala et al. (2011) did research on mice and found that OXT-deficient or OXTR-deficient mice showed more anxiety-related behaviors, which may resulted from the deficit in OXT modulation. This finding, nevertheless, supports the study of rodents done by Windle et al. (2004) that involves application of synthetic OXT. It was found that OXT responses to the physical and psychological stress as well as fearful situations by impairing social behavioral and neuroendocrine activities (Heinrichs et al., 2008). Thus, OXT induces social approach behavior and deter self-protective actions and natural social avoidance (Heinrichs et al., 2008).

Conversely, administration of AVP may subsequently raise anxiety in human with respect to fear response. Thompsan et al. (2006) have shown that intranasal administration of AVP increased the skin conductance that is caused by sweat, and rate of heartbeat in human towards fearful faces. Those effects are due to the fact that application of AVP interrupts the balanced activities of both neuropeptides and shifts the balance towards hyperanxiety. Therefore, the balance of OXT and AVP activities and endogenous activation of their receptors may regulate the autonomic expression of fear as well as general and social anxiety.

As with anxiety, depression is suggested to be another psychopathology that is modulated by the activities of OXT and AVP in an opposite manner. A research done on depressed patients revealed that they have alleviated plasma OXT level (Frasch et al, 1995) and this is in accordance with a study done by Von Londen et al, where they detected an increase in plasma AVP among depressed patients. Such hyperactivity may due to the overexpression of both AVP and AVPR1A genes in the PVN (Weng et al, 2008). In addition to that, interaction of the neuropeptides with monoaminergic systems, including the serotonergic and corticotropin-releasing factor (CRF) systems, contributes to depression as well as anxiety (de Kloet et al, 2005; Bao et al, 2010). Clinically, the anxiolytic effects of OXT may be utmost potent in withdrawing depression-like symptoms such as sexual dysfunctions, sleep disturbances and anhedonia (Slattery et al, 2010). Consistent findings from both humans and animal research, despite the distinct research approaches, have revealed that central or peripheral administration of OXT could exert antidepressive-like effects (Domes et al, 2010). Application of OXT may likely shift the OXT-AVP balance towards active-stress coping. Figure 1 shows the hypothetical model suggested by Neumann et al (2012), which illustrates the balanced activity of OXT and AVP. 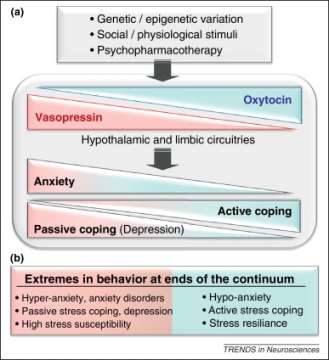 Figure 1: Figure shows (a) the hypothetical model of OXT-AVP balanced and (b) the range of behavioural phenotypes (Neumann et al, 2012)

Despite the established roles of OXT and AVP in anxiety and depression, OXT and AVP also influence various social behaviors in species ranging from rats to humans (Veenema et al, 2008). Animal research has provided an insight into the roles of both neuropeptides in regulating maternal care, aggression (Bosch et al, 2008), attachment (Winslow et al, 1993; Williams et al, 1994) and social cognition (Gabor et al, 2012). The effects of both neuropeptides on social behaviours gravitate into the same direction and this seems inconsistent with the contrasting anxiety and depression effects of OXT and AVP (Donaldson et al, 2008). Regarding social behaviors, OXT is important in regulating sexual behaviors and social preferences (Lukas et al, 2011) whereas AVP plays a dominant role in regulating inter-male aggression (Ferris et al, 2008). Research of autism has revealed that the major contributing factor to the etiology of such disorder is the impairment of OXT-AVP balance (Harony et al, 2010). Indeed, recent evidence suggests that the application of intranasal OXT may facilitate prosocial effects in high-functioning autism (Herbrecht et al, 2010). Therefore, based on the advances in animal models and recent human studies, it is clear that neuropeptides balance is critical in regulating both behavioral and neuronal network levels (Neumann et al, 2012).

Factors affecting the local release of OXT and AVP

The stress-induced patterns of OXT and AVP local release within the brain, are dependent on various factors, such as environment, gender and the genetically determined stress sensitivity. These factors have been shown to be significant in functionality of neuropeptides for appropriate emotional behaviours.

Novel environmental stimuli, which may be positive or negative, can affect OXT and AVP systems. As seen in rodents’ models for anxiety and depression, the contrary effects of positive and negative stimuli are important for mental health, emotional behavior and psychopathology of an individual (Neumann, I., 2009)

Aside from the manipulations of the social environment, sexual dimorphism of OXT/AVP activity also influences neurogenesis. The variations of OXTR and AVPR in males and females, (Francis et al, 2002), gender-specific roles of brain functions (Insel et al, 2000), gender differences in amygdala reactivity to intranasal OXT (Domes et al,2010) support the hypothesis of gender-dependent activity of the neuropeptides.

In addition to that, genetic and epigenetic variations also determine the anxiety- and depression-related behaviours of an individual (Murgatroyd et al, 2010). The involvement of Single nucleotide polymorphisms (SNP) that generally disturbs the replication system, may affect the synthesis of neuropeptides and the availability of their receptors. Besides, the association of epigenetic variations may result in modifications of OXT and AVP systems. This can be seen in autistic patients where OXTR is greatly reduced, which then undermine OXT activity (Hollander et al., 2003).

The discovery of various behavioral functions of OXT and AVP has revealed the importance of both neuropeptides in regulating anxiety, depression and social behaviours as reported in rodents and human. The imbalance of OXT and AVP activities may cause impairments in emotional behavior and this is associated with various psychopathological states, which then subsequently affects the quality of life. On the brighter side, the brain OXT system has been a promising target for novel psychotherapeutic approaches to overcome a broad range of psychological disorders including diseases related to anxiety and depression, social phobia, abnormal social behaviours and autism (Neumann, 2008).