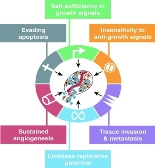 Cancer is one of the most diverse diseases that arise in humans whereby it exceeds 200 distinct entities that reflect the ‘differences in the normal cells-of-origin, acquired somatic mutations, variably altered transcriptional networks, and influences of local tissue microenvironments’ (Lambert, Pattabiraman and Weinberg, 2017). In order to bring the complexity of cancer under a set of defined principles Hanahan and Weinburg outlined specific hallmarks of cancer (Figure 1). Tissue invasion & metastasis is a lethal hallmark of cancer that results in most patients dying from the spread of the cancer to secondary sites instead of as a consequence of the primary tumour. (Massagué, Batlle and Gomis, 2017).

The mechanisms associated with tissue invasion and metastasis are very different and complex depending on the cancer type. While many of the genes associated with the development of metastasis have been discovered, many of the specific pathways that may provide targets for metastatic suppressors have yet to be precisely defined. Breast cancer has been used as an example to  illustrate how the different biological subtypes vary in the advancement of research undertaken on them and the treatment for the prevention of metastasis is in different stages.

Figure 1: The 6 hallmarks of cancer that define a set of functional characteristics that most cancers are believed to have during their developments with a difference in mechanistic strategies present (from Hanahan and Weinberg, 2000). 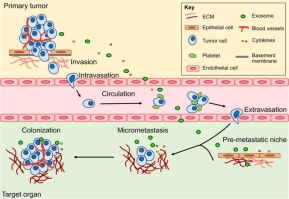 Metastasis is the spread of tumour cells from a primary site to set up tumours at a secondary site. It one of the major causes of cancer-related deaths around the world despite many advances in the development of therapeutic treatments (Liu et al., 2017). Metastasis is a multi-step process that involves the primary tumour cells to detach from the original tumour, move into the lymphatic system or into the bloodstream and travel through these to reach distant organs (Friedl and Wolf, 2003). The first step in this process is known as local invasion, where the tumour cells migrate into adjacent tissues to the primary tumour by breaking down the basement membrane and invading the surrounding extracellular matrix (ECM) (Gómez-Cuadrado et al., 2017). The next step that occurs is intravasation where the tumour cells enter the bloodstream in order to circulate around the body (Chiang, Cabrera and Segall, 2016). Within blood vessels, the tumour cells exist as single cells or clusters, coated with platelets (Massagué and Obenauf, 2016). After travelling in the bloodstream, the tumour cells will attach to endothelial cells in order to undergo extravasation and travel into a secondary organ (Gómez-Cuadrado et al., 2017). Only a small fraction of these cells are fully capable to perform complete metastases and seed at these secondary sites (Celià-Terrassa and Kang, 2016). These cells are known as metastasis-initiating cells (MICs) and they have evolved from primary tumour cells to have more advantageous attributes to help in the formation of a secondary tumour. These attributes include ‘cellular plasticity, metabolic reprogramming, the ability to enter and exit dormancy, resistance to apoptosis, immune evasion, and co-option of other tumour and stromal cells’ (Celià-Terrassa and Kang, 2016). Tumour cells will only migrate and invade another part of the body after the primary tumour is grown. It has been shown, however, that the tumour cells at the secondary site may remain dormant for a time which accounts for the delay in the detection between the primary cancer and the metastatic cancer (Röcken, 2010).

Site of secondary tumour – random or not?

Researchers have proposed different theories to explain how the site of a secondary tumour is chosen. One of the most popular theories is the mechanistic theory. It states that the movement of the tumour cells is dependent on the blood flow through the organs involved and where the circulation delivers the tumour cells (Arvelo, Sojo and Cotte, 2016). The metastasising cell may become trapped in the narrow capillaries of the first organ they come to. In this case, the most beneficial thing for the MIC to do is form the secondary tumour at this site. To determine the metastatic patterns of multiple different tumours, various anatomical and mechanical factors are used (Arvelo, Sojo and Cotte, 2016). An example of a cancer spreading via a mechanistic approach are gastrointestinal tumours which start as localised tumours in the digestive tract mucosa and proliferate from there (Arvelo, Sojo and Cotte, 2016). These tumours grow to invade the digestive tract mucosa to the deepest layer until it reaches the serosa. The tumour can then invade any organ within or outside the abdomen once it has crossed the intestinal wall (Arvelo, Sojo and Cotte, 2016).

Another well-known and popular theory is known as the organ tropism or more commonly called the ‘seed and soil’ hypothesis. The MICs that have gone through the metastatic journey are influenced by specific stimuli or specific micro-environments within the body to allow the MICs to recognise the best environment to seed into in order to proliferate and form the secondary tumour (Ganguly et al., 2013).  The primary and secondary site of the cancer may have a stimuli or micro-environment that consists of shared receptors or chemokines (Ben-Baruch, 2009).

Breast cancer is composed of five different biological subtypes; human epithelial growth receptor type 2 (HER-2), luminal A, luminal B, claudin-low, and basal-like (Al-Mahmood et al., 2018). The relevance of these subtypes towards to metastatic ability of breast cancer is shown in that the different subtypes metastasize to different organs in the body (Kennecke et al., 2010). This leads to a difference in the survival rate of the patients with different biological subtypes as patients with a basal-like subtype often develop metastatic tumours in the lungs or the brain while those patients with a luminal subtype may relapse and develop tumours in bones (Gerratana et al., 2015). The breast cancer biological subtype is important information to acquire when treating a patient as understanding the type of metastatic spread associated with the subtype will play a big role in deciding what treatment a patient will receive and have an effect on the clinical outcome.

The most fatal characteristic of breast cancer cells is their capability of leaving their primary location in the breast and traveling to secondary sites in order to grow into macroscopic masses (Bohl et al., 2013). This distant metastasis is responsible for approximately 90% of breast cancer related deaths (Xie, Shao and Li, 2017). Due to this fact, metastasis suppressors which are a subset of metastasis-regulatory molecules are key in stopping this lethal action of metastasis from occurring (Bohl et al., 2013). However, although advancements have been made in the identification of the genes associated with metastatic activity, the specific molecular mechanisms responsible for breast cancer metastasis have not been defined completely, thereby hindering the creation of effective therapeutic strategies (Xie, Shao and Li, 2017). Knowing that vascular cell adhesion molecule 1 (VCAM1), secreted protein acid and rich in cysteine (SPARC) and matrix metalloproteinase 2 (MMP2) are involved in breast cancer lung metastasis (Minn et al., 2005) doesn’t provide a specific way to suppress these genes in order to prevent the metastasis they promote from occurring.

Tissue invasion and metastasis is one of the 6 hallmarks of cancer. It is an area of cancer that many researchers dedicate their time to in order to unravel the many different complex mechanisms and pathways associated with metastasis in different cancer types. Using the example of breast cancer, it is shown that although some advancements are made within specific subtypes, other areas need to be explored further before a treatment can be created. This is the same for many other cancer types as when metastasis occurs, a patients chance for survival is reduced. Therefore, the best chance of recovery after the discovery of a cancer is to firstly prevent the spread via metastasis by using metastatic suppressors.